When I was growing up in (rural-ish) central New York, we had one TV.  We received 5 local stations through the antenna on the roof (abc, nbc, occasionally cbs if the wind was blowing just right, then Fox came along, and a pbs station).  This was a time when TV programming on the major networks actually ended at about 1:00 a.m. with a video of the American flag waving in the wind and the national anthem playing.  When that was over, there was nothing on TV but static.  This is something my kids can’t imagine. Not that they watch regular TV that often anyway (YouTube, Vimeo, etc.), but every time they turn it on, there are at least 100 shows to choose from on 4 TVs.

This wasn’t the case for my siblings and me.  Usually, the first person in the living room got dibs on what show was on or there had to be a “discussion” to figure out what everyone would watch.  Sometimes this ended in the TV being turned off by Mom or Dad with a “suggestion” that we go outside and get some fresh air.  Other times, we would decide to figure it out on our own and end up on the local PBS station watching a man with a huge perm (this was the 1980s) paint beautiful scenes in about 25 minutes.

We (my 5 siblings and I) were all in awe while we watched Bob Ross paint wonderful paintings while talking to us (the viewers) about everything from his pet squirrels to painting techniques.  And at the end of every episode I felt like I could paint just like Bob Ross!  I never tried, but I felt like I could!

Recently, my kids have discovered the talent and wonder of Bob Ross through YouTube and Netflix. They love his words of wisdom:

And I love that they love these words of wisdom.  You can find more here.

For Christmas this year, my son and I received Bob Ross T-shirts.  Connor’s has just an image, while mine has a quote as well: 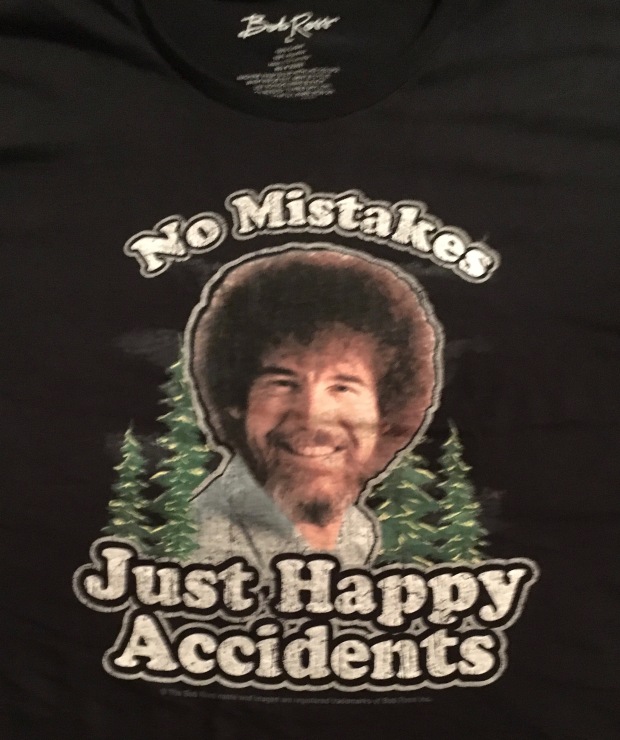 Bob Ross was referring to painting when he said these words; “In painting there are no mistakes, just happy accidents.”  In other words, when you paint your mountain the wrong shape, treat it as a happy accident.  It can still be a mountain, there may just end up being a happy tree or a happy cloud that takes care of your happy accident.

I think it works for math class, too.  Recently, I modeled a Desmos lesson for a 7th grade teacher.  The students had been working with expressions and equations but were struggling with the abstract ideas associated with expressions and equations.  The teacher and I planned for me to model Desmos using Central Park to see how students reacted to the platform (this was their first time using Desmos) and how I managed the class using the teacher dashboard.

During the lesson, there was a lot of productive struggle.  Students were working in pairs and making  happy accidents.  They were happy accidents!  Because students kept going back for more.  At times there was some frustration involved and I stepped in to ask questions like:

The last question was incredibly informative.  Many students who answered this question were not confident at all that their cars would all park, but as they moved through the lesson, their confidence grew.

One of the best take-aways the teacher mentioned during our post-conference was  when she mentioned a certain boy and girl who she paired together so the (high performing) girl could help the (low performing) boy.  The exact opposite happened.  The girl was trying to crunch numbers on screen 5 with little success.  The boy just needed a nudge to think about the image and to go back to some previous screens to settle some ideas in his mind before moving ahead with his idea that the answer is 8.  Then, he got to expain how he knew it was 8 with the picture, conceptually, to his partner.  The teacher’s happy accident was in believing her students would always perform a certain way.  When students are engaged in tasks that are meaningful, they tend to perform differently than when they’re given a worksheet with 30 meaningless problems on it (the norm for this class before Desmos).  Ah-has all around and the “low student” shows that he knows more than the teacher thinks.

The icing on the cake?  Several students walking out of the classroom could be heard saying, “That was cool.” or “That was fun.”

Let’s treat math mistakes as happy accidents, something to learn from and problem solve our way through.  When students (all humans) make a mistake, synapses fire.  The brain grows (More on this from Jo Boaler here).  What we do as teachers from this point, determines how much more the brain will grow.  If we treat student mistakes as happy accidents, perhaps their brains will grow a bit more than if we continue to treat mistakes in the traditional manner.

Let’s hear it for Bob Ross.  He probably never thought his words of wisdom about painting would be translated to the math classroom.

Becoming the Math Teacher You Wish You'd Had

Always Improving The Way I Teach

Making Sense of it All

I have no idea why I picked this blog name, but there's no turning back now

Just an attempt to be better...

Working to help teachers think outside the traditional way of doing, and teaching, mathematics.

Journey of A Mathematics Educator

Learning about learning and teaching mathematics.

Musings and Strategies From the Teachers Next Door

A cozy place to share and reflect on my experiences in math education.

The mathematics I encounter in classrooms

Does This Make Sense?